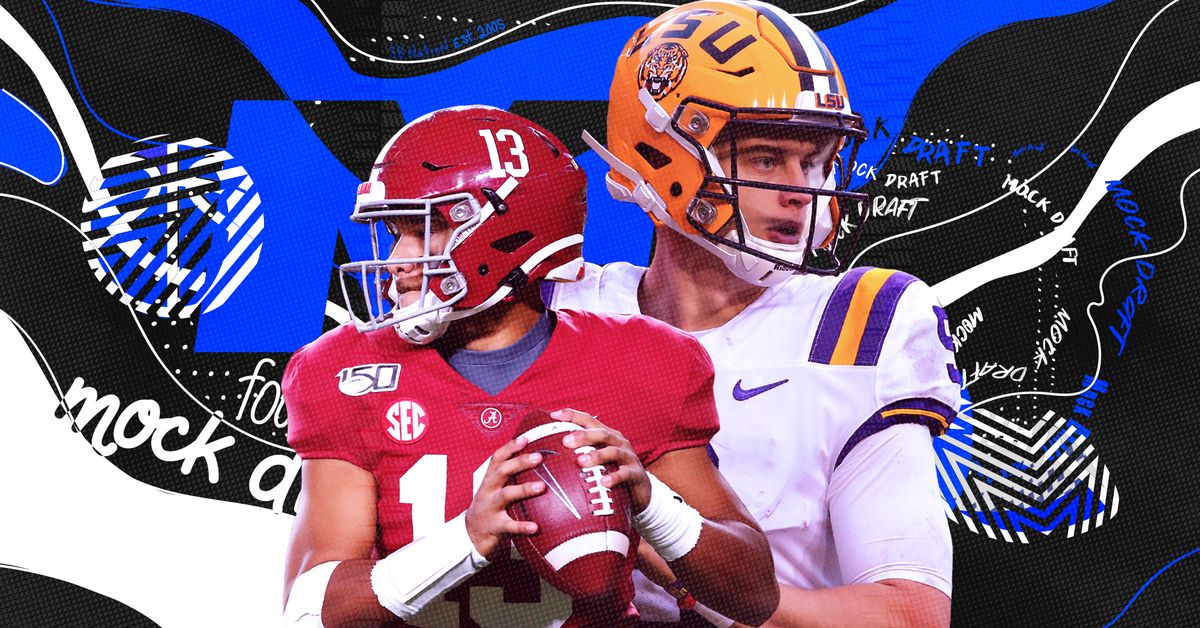 In this week’s 2020 NFL mock draft, we’re going to jump through some hoops to see where it makes sense for teams regarding Alabama quarterback Tua Tagovailoa.

After Tagovailoa officially declared for the draft, one report said he got positive news following a serious hip injury that ended his season.

One reason #Bama QB Tua Tagovailoa declared for the NFL Draft: I’m told his visit to NY to get an update on his medical situation was all positive. He has more tests at 12 and 16 weeks, but he got a solid before saying he was NFL bound.

But it’s one thing to get a clean bill of health from your own doctor, and it’s another to get it from NFL teams. It’s possible that some teams are scared off by Tagovailoa’s extensive injury history.

If, for some reason, Tagovailoa falls, here’s a look at how the first round could play out.

Look, we know that the Bengals are going to take Burrow with the first overall pick. But even after his huge performance in the national championship game, he’s not without risk. Before passing game coordinator Joe Brady arrived at LSU this season, Burrow only completed less than 60 percent of his passes. With Brady this season, that number was nearly 78 percent. Burrow’s skills are impressive, but the Bengals will have to make sure he’s not a product of the LSU offense. It’s also worth noting that Burrow is slightly older than Lamar Jackson of the Ravens. That’s less of an issue, but age sometimes factors in.

While there may be some questions about Burrow, and plenty of other players in the draft, there are very few questions about Young. While no prospect is flawless, Young is as close as it gets. A front line of Young, Montez Sweat, Da’Ron Payne and Jonathan Allen is scary.

Let the comparisons begin between Brown and Ndamukong Suh, whom the Lions picked second overall in 2010. Like Suh, Brown brings ferocity to the defensive line and the ability to disrupt the pocket.

Pick a position for Simmons and it would stick, whether it is linebacker, safety, or even pass rusher. No matter what Simmons is asked to do, he does it well. Simmons’ versatility will ease the transition for new defensive coordinator Patrick Graham.

If the Dolphins somehow don’t end up with Tagovailoa, they should have their first choice of offensive tackles. Thomas is a very good left tackle prospect with athleticism and quick feet. The Dolphins have to build the offensive line this offseason, and they could start in earnest at No. 5.

Los Angeles is another team in contention for Tagovailoa. If Philip Rivers leaves, the Chargers could turn to another veteran quarterback in the short term. Maybe that wild Tom Brady scenario your co-worker talked about comes true. Or maybe they take a chance on Jameis Winston or Marcus Mariota and hope they’re the Los Angeles version of Ryan Tannehill. The Chargers have needed a right tackle for several years, and Wills should be good from day one in the NFL.

Like the Chargers, the Panthers are another team that could reasonably need a quarterback like Tagovailoa. But again, let’s assume Carolina keeps Cam Newton or adds a veteran passer. Maybe this is where Rivers ends up. If he does, the Panthers can wait a year and continue developing Will Grier. On the defense, cornerback James Bradberry is a free agent, and the Panthers could find an upgrade with Okudah, one of the elite players in the draft.

The Cardinals are a team that, without question, doesn’t need Tagovailoa after picking Kyler Murray first overall last year. It’s impossible to ignore Arizona’s need to keep Murray protected going forward, though. Coming out of Iowa, Wirfs is a blocker who plays the game the right way and could work on either side in Arizona.

Jacksonville makes a lot of sense for Tagovailoa if Minshew Mania didn’t run wild over you, brother. But if a team with the fifth pick is concerned about him, a team with the ninth pick could be too.

Kinlaw is going to be a popular name leading up to the draft. There aren’t too many interior defensive linemen in the NFL with his skillset at 6’6 and a lean-looking 300 pounds. If the top three offensive tackles are gone, the Jaguars could take yet another defender.

Questions about Baker Mayfield might be creeping up after his disappointing second season, but even for the Browns this would be too soon to push him out for Tagovailoa. The Browns showed this season that they badly need a versatile, difference-making safety. When he’s healthy, Delpit can be that player.

The Jets are obviously another team that won’t be taking a quarterback in the first round after selecting Sam Darnold in 2018. The catch with Darnold is that his receivers aren’t good. Jeudy would give the Jets a lead target for their budding quarterback.

We could have our winner for the Tagovailoa sweepstakes with the Raiders for a few reasons. David Carr has been an average quarterback during his career and could get replaced. The Raiders are also moving to Las Vegas and new fans could rally around a rookie quarterback. Most importantly, the Raiders have two first-round picks thanks to the Khalil Mack trade. That means there is some risk aversion to taking Tagovailoa for the Raiders. It could also mean the Raiders can make an attractive offer if they wanted to move up.

The Colts are a team that will need to at least kick the tires on Tagovailoa if they think he’ll drop. Jacoby Brissett was up-and-down this season, and the Colts may be looking for a franchise signal caller. Whomever is making the throws for Indianapolis needs someone besides T.Y. Hilton to catch the ball. Lamb has that big-play ability.

This is a repeat from a previous mock, but pairing Herbert with Bruce Arians is too fun to ignore.

The Broncos should go all-in with Drew Lock next season, and a receiver like Ruggs can give him a deep target on the outside.

Some people think Epenesa will be a top-10 pick, but he could land in this range because he’s not a speed rushing defensive end. Instead, he’s a do-everything type of end that the Falcons need.

What happens to free agent defensive back Byron Jones will define what the Cowboys do in the draft. If he leaves, the Cowboys could find another big cornerback in Diggs.

If the Dolphins punt on taking Tagovailoa, there’s no reason to draft someone like Utah State quarterback Jordan Love in the first round. At that point, you may as well wait on a 2021 class that should have Clemson’s Trevor Lawrence and Ohio State’s Justin Fields in it. Gross-Matos is a player who can line up all over the defense and pressure the quarterback.

It was easy overlook Shenault this season. His 2019 wasn’t statistically as good as his 2018, and Colorado struggled through a 5-7 season. But Shenault is still a highly regarded draft prospect for his combination of size, hands, and ability to get open. With the right quarterback, he can be a star in the NFL.

Murray is a rangy linebacker with an impressive combination of athleticism and tenacity. Pairing him with Myles Jack would give Jacksonville a new duo of quality linebackers who can roam the field and make big tackles.

Higgins may have only had three receptions in Monday night’s national title game, but he still profiles as a No. 1 receiver option in the NFL. As the season wore on, it was obvious that the Eagles need weapons on offense. A receiver like Higgins should be the first of a few added in this draft.

If Lewis checks out fine with his medical evaluations, he has a strong chance of going in the top 32. With Lorenzo Alexander’s retirement, the Bills can find his replacement in the versatile Lewis.

If the Patriots don’t like the wide receiver options in the first round, they could turn to the defense. Kyle Van Noy and Jamie Collins are free agents, and the Patriots could lose both. Chaisson would need to be developed, but he’s an effective pass rusher with a good first step.

Love is going to be the single most fascinating player to follow through the draft process and to watch for in the first round. He’s polarizing because his stats are poor, but so were Daniel Jones’. Love can be molded under Drew Brees before becoming the Saints’ quarterback of the future.

It was obvious in Minnesota’s playoff loss to the 49ers that the offensive line play has to get better for the Vikings. Jones fits in the scheme Gary Kubiak and Rick Dennison use in Minnesota because he’s athletic and moves around smoothly.

If the 2020 draft is truly the one where Miami doesn’t take a quarterback, having good options on offense for 2021 is going to be key. Miami already has a solid group of wide receivers, but it needs a legitimate lead running back. Swift is arguably the best running back in the draft with his vision and pass-catching skills.

Seahawks coach Pete Carroll admitted after being knocked out of the playoffs that the team has to be better on defense. Okwara is raw, but he has high potential as a pass rusher.

A few holes were exposed in the Ravens’ playoff loss to the Tennessee Titans. Namely, Baltimore has to get better along the defensive line and at linebacker. Baun gets up the field in a hurry and can be used rushing the passer or playing the run.

Tennessee is making a dream run through the playoffs despite clearly needing help at pass rusher. Weaver isn’t a favorite of everyone, but I like his ability to user power against blockers and get up the field.

After Davante Adams, the Packers have rotated No. 2 receivers all season. A player like Hamler can stop that rotation. He’s not a big receiver, but he offers a dynamic element to an offense.

With star freshman Derek Stingley Jr. opposite him, Fulton got picked on at times this season. But the junior held his own and showed off his man coverage skills and ability to read routes. With Bashaud Breeland, Morris Claiborne and Kendall Fuller all free agents, the Chiefs may have a need in the secondary.

Joe Staley’s stellar career is winding down, and the 49ers could find his long-term replacement in this draft. That could be Jackson, who could slot directly into the left tackle spot.