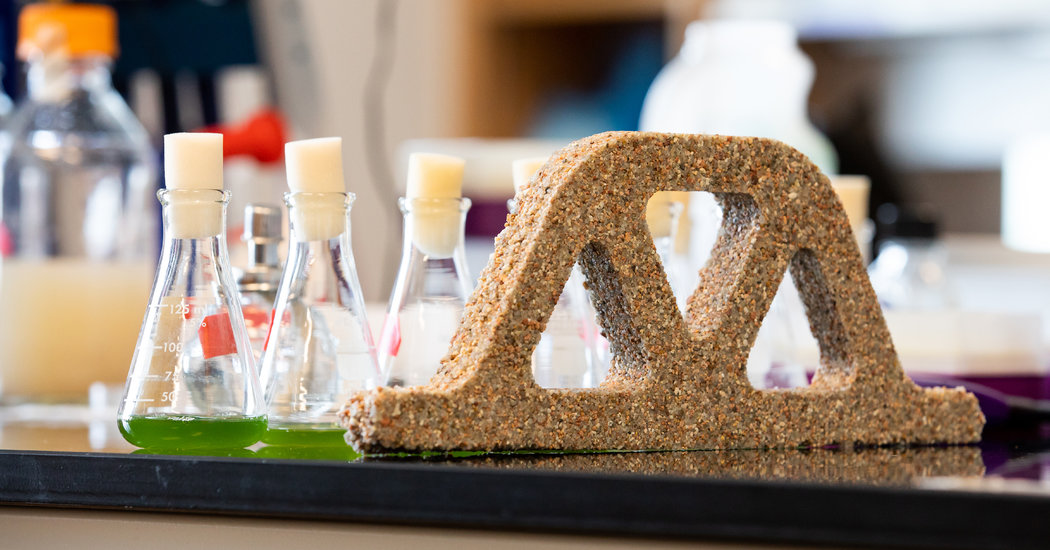 For centuries, builders have been making concrete roughly the same way: by mixing hard materials like sand with various binders, and hoping it stays fixed and rigid for a long time to come.

Now, an interdisciplinary team of researchers at the University of Colorado, Boulder, has created a rather different kind of concrete — one that is alive and can even reproduce.

Minerals in the new material are deposited not by chemistry but by cyanobacteria, a common class of microbes that capture energy through photosynthesis. The photosynthetic process absorbs carbon dioxide, in stark contrast to the production of regular concrete, which spews huge amounts of that greenhouse gas.

Photosynthetic bacteria also give the concrete another unusual feature: a green color. “It really does look like a Frankenstein material,” said Wil Srubar, a structural engineer and the head of the research project. (The green color fades as the material dries.)

Other researchers have worked on incorporating biology into concrete, especially concrete that can heal its own cracks. A major advantage of the new material, its creators say, is that instead of adding bacteria to regular concrete — an inhospitable environment — their process is oriented around bacteria: enlisting them to build the concrete, and keeping them alive so they make more later on.

The new concrete, described Wednesday in the journal Matter, “represents a new and exciting class of low-carbon, designer construction materials,” said Andrea Hamilton, a concrete expert at the University of Strathclyde, in Scotland.

To build the living concrete, the researchers first tried putting cyanobacteria in a mixture of warm water, sand and nutrients. The microbes eagerly absorbed light and began producing calcium carbonate, gradually cementing the sand particles together. But the process was slow — and Darpa, the Department of Defense’s speculative research arm and the project’s funder, wanted the construction to go very quickly. Necessity, happily, birthed invention.

Dr. Srubar had previously worked with gelatin, a food ingredient that, when dissolved in water and cooled, forms special bonds between its molecules. Importantly, it can be used at moderate temperatures that are gentle on bacteria. He suggested adding gelatin to strengthen the matrix being built by the cyanobacteria, and the team was intrigued.

The researchers bought Knox brand gelatin at a local supermarket and dissolved it in the solution with the bacteria. When they poured the mixture into molds and cooled it in a refrigerator, the gelatin formed its bonds — “just like when you make Jell-O,”

After about a day, the mixture formed concrete blocks in the shape of whatever molds the group used, including two-inch cubes, shoe box-size blocks and truss pieces with struts and cutouts. Individual two-inch cubes were strong enough for a person to stand on, although the material is weak compared to most conventional concretes. Blocks about the size of a shoe box showed potential for doing real construction.

“The first time we made a big structure using this system, we didn’t know if it was going to work, scaling up from this little-bitty thing to this big brick,” said Chelsea Heveran, a former postdoc with the group — now an engineer at Montana State University — and the lead author of the study. “We took it out of the mold and held it — it was a beautiful, bright green and said ‘Darpa’ on the side.” (The mold featured the name of the project’s funder.) “It was the first time we had the scale we were envisioning, and that was really exciting.”

When the group brought small samples to a regular review meeting with officials from Darpa, they were impressed, Dr. Srubar said: “Everyone wanted one on their desk.”

Stored in relatively dry air at room temperature, the blocks reach their maximum strength over the course of days, and the bacteria gradually begin to die out. But even after a few weeks, the blocks are still alive; when again exposed to high temperature and humidity, many of the bacterial cells perk back up.

The group can take one block, cut it with a diamond-tipped saw, place half back in a warm beaker with more raw materials, pour it in a mold, and begin concrete formation anew. Each block could thus spawn three new generations, yielding eight descendant blocks.

The Department of Defense is interested in using the reproductive ability of these “L.B.M.s” — living building materials — to aid construction in remote or austere environments. “Out in the desert, you don’t want to have to truck in lots of materials,” Dr. Srubar said.

The blocks also have the advantage of being made from a variety of common materials. Most concrete requires virgin sand that comes from rivers, lakes and oceans, which is running short worldwide, largely because of the enormous demand for concrete. The new living material is not so picky. “We’re not pigeonholed into using some particular kind of sand,” Dr. Srubar said. “We could use waste materials like ground glass or recycled concrete.”

The research team is working to make the material more practical by making the concrete stronger; increasing the bacteria’s resistance to dehydration; reconfiguring the materials so they can be flat-packed and easily assembled, like slabs of drywall; and finding a different kind of cyanobacteria that doesn’t require the addition of a gel.

Eventually, Dr. Srubar said, the tools of synthetic biology could dramatically expand the realm of possibilities: for instance, building materials that can detect and respond to toxic chemicals, or that light up to reveal structural damage. Living concrete might help in environments harsher than even the driest deserts: other planets, like Mars.