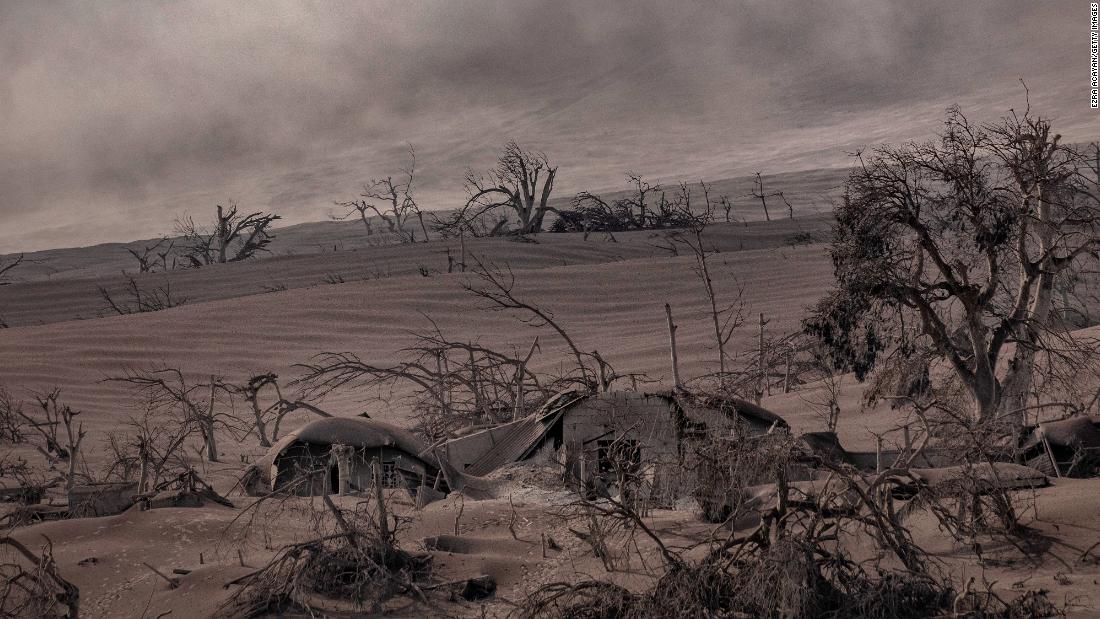 Ignoring government warnings to keep away, a number of residents who lived by the foot of the volcano

to tend or rescue their animals.

Stark pictures show pigs, horses, cows, and birds — their hair, fur and feathers coated with thick ash — being carried to relative safety, while

, the second most active in the Philippines, smoulders in the background.

remains at alert level four out of a possible five, meaning an “explosive eruption is possible within hours to days.”

The volcano, about 37 miles (60 kilometers) south of the capital Manila on the island of Luzon, began erupting on Sunday, sending ash up to nine miles (14 kilometers) into the air and prompting large-scale evacuations.

Mirra Lipaopao, 27, said she didn’t hear the rumblings of the volcano but at around 5 p.m. saw the mud and charcoal-like matter rain down.

“I panicked,” she told CNN from a gymnasium that has been turned into an evacuation center in Tanauan. “I grabbed my partner and kid to get out of the house and we just ran as far as we could.”

Lipaopao said they went back to their home on Monday and found it was covered in ash and mud. They began cleaning but successive tremors jolted the ground so they returned to the shelter.

Three days after the eruption began, volcanic activity around Taal is ongoing. Fountains of lava generate dark gray, steam-laden plumes up to 1 kilometer (0.6 miles) high. Fissures or cracks have opened up in several areas and 466 earthquakes have been recorded since Sunday. Volcanologists warn that further eruptions are possible.

“These new strong, continuous earthquakes that we are now experiencing are due to fissuring, which means that there really is magma that is still making its way out of Taal,” Mariton Bornas, chief of volcano monitoring and eruption at PHIVOLCS

Those still within or returning to the immediate dangerous zone within a 14-kilometer (8.7 miles) radius around the volcano risk tremors, fissures and the threat of a sudden pyroclastic flow.

“As soon as you have lava being erupted into the system, it just takes some water infiltrating to create an explosive system. Or for the later magma to be more gas-charged that it is currently,” said David Phillips, head of the School of Earth Sciences at the University of Melbourne, Australia.

Other hazards include potential mudslides caused by rain washing piles of unconsolidated ash and the threat of the volcano’s slopes slumping into the lake, which could cause a tsunami.

“There is any number of hazards associated with volcanoes. The risk of any one of those might be fairly low but it has shown significant activity lately — so it’s time for caution,” said Phillips.

Almost half a million people live within the 14 kilometer (8.7 miles) dangerous zone and PHIVOLCS has requested a “total evacuation” of everyone in this area, and issued advisory warnings for those in a larger area of 17 kilometers (10.6 miles).

Around 44,000 people from Batangas and Cavite provinces have sought shelter in 217 temporary evacuation centers set up by authorities. The total number of evacuees could be higher, with some choosing to stay with family members and relatives in other parts of the country.

Some towns, such as Talisay on the banks of Lake Taal, have been placed under lock down by police and fire services, and evacuations are being enforced, according to National Disaster Risk Reduction and Management Council (NDRRMC) spokesperson Mark Timbal.

“The advice to people who are trying to go back is to follow the call of the government and the agencies, and that is to avoid going back,” Timbal said.

One big concern for those in the vicinity is the potential

of breathing in the toxic volcanic ash — which carries microscopic shards of glass — that has blanketed everything in sight.

“(The shards of glass) are hazardous to lungs,” said Joseph Michalski, director of the Earth and Planetary Science division at the University of Hong Kong. “You don’t want stuff like that in your lungs. It can get lodged in there and make you quite ill.”

International aid group Save the Children said in a statement that small children in evacuation centers were suffering from respiratory illnesses such as colds and coughs.

In the city of Tanauan about 730 people are staying in a gymnasium that has been converted into an evacuation center. Families are living in cramped conditions and sleeping on the hard floor.

The sudden eruption on Sunday caught people off guard and many families fled wearing the clothes they were in and carried little to no possessions.

Because of the ongoing threat of another, bigger eruption, no one knows when they will be able to return home or what they will find when they get there.

Many of their livelihoods have been destroyed.

Timbal said that activity had been recorded at the volcano as early as March last year and that residents and local government units were aware that “a state of preparedness” was in place. But “the speed of escalation was unexpected,” he said.

Some locals living on or near the volcano, many of them poor laborers or farmers, made money from offering horse rides to tourists. Others built their livelihoods farming the fertile soils that are associated with many volcanoes or fishing tawilis or “live sardines” only found in Batangas province.

The volcano is surrounded by a lake, which is a popular attraction and many of the towns in the vicinity are tourism hot spots. There are several amusement parks, lakeside resorts and yacht clubs nearby.

The holiday town of Tagaytay, which lies close to the water’s edge, is a popular getaway for Manila residents who often take boats onto the lake and hike up the volcano.

“Many of these landscapes are very beautiful and people want to go visit them,” said Phillips. “It’s beautiful but it’s also potentially deadly — it’s that fatal attraction.”