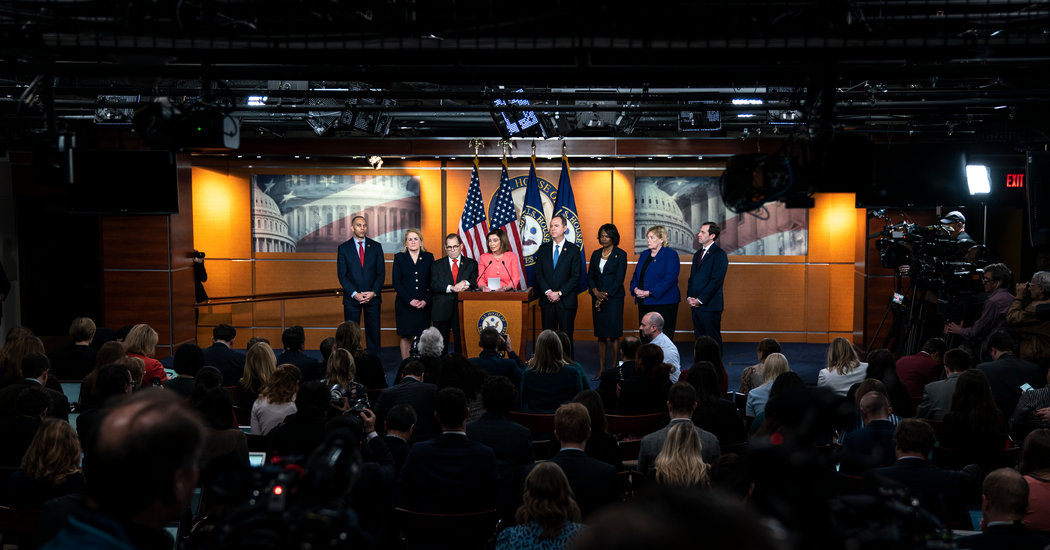 WASHINGTON — The House of Representatives voted Wednesday to send the Senate two articles of impeachment against President Trump, appointing seven Democrats to prosecute the case and initiating only the third presidential impeachment trial in American history.

The 228-to-193 vote came almost a month after the House impeached Mr. Trump on charges of abuse of power and obstruction of Congress, formally accusing him of seeking foreign election assistance from Ukraine and then trying to conceal his actions from a House inquiry. Like that earlier vote, Wednesday’s fell largely along party lines.

Only one Democrat, Representative Collin C. Peterson of Minnesota, joined every Republican in voting “no.”

It set the stage for what promises to be a partisan impeachment trial, which has already opened bitter divisions in the normally staid Senate, and has the potential to shape Mr. Trump’s legacy, stoke the country’s political polarization and inject fresh uncertainty into the 2020 elections.

Earlier Wednesday, Speaker Nancy Pelosi introduced the lawmakers who would serve as prosecutors, or managers, of the case. Both chambers were also grappling on Wednesday with a trove of new documents related to Mr. Trump’s pressure campaign that played into Democrats’ arguments that any trial must include new witnesses and evidence. More material was expected to be disclosed, according to an official working on the impeachment inquiry.

“Time has been our friend in all of this because it has yielded incriminating evidence, more truth into the public domain,” Ms. Pelosi told reporters, arguing that the emergence of new revelations had validated her strategy to delay pressing charges for weeks.

At the White House, Mr. Trump denounced the inquiry anew as a “hoax,” and encouraged Republicans to rally to his defense shortly before the vote. During an event in the East Room, he told members of the House that they should leave if they needed to in order to cast votes at the Capitol across town against moving forward on the matter.

“I’d rather have you voting than sitting here listening to me introduce you,” Mr. Trump said during a signing ceremony for an initial trade deal with China. “They have a hoax going on over there — let’s take care of it.”

As expected, the House prosecution team will be led by Representative Adam B. Schiff of California, the chairman of the Intelligence Committee who led the Ukraine inquiry.

He will be joined by Representatives Jerrold Nadler of New York, the chairman of the Judiciary Committee, Zoe Lofgren of California, Hakeem Jeffries of New York, Val B. Demings of Florida, Jason Crow of Colorado and Sylvia R. Garcia of Texas. Mr. Crow and Ms. Garcia are both first-term members.

The managers are scheduled to reconvene in the Capitol at 5 p.m. to finalize the articles with Ms. Pelosi in a formal “engrossment ceremony” that will mark the beginning of an elaborate, and highly orchestrated, ritual. From there, accompanied by the House clerk and sergeant-at-arms, the managers will file from the House, through the old House chamber and the Capitol Rotunda to the Senate, where Democrats will present the articles to the secretary of the Senate.

But the trial itself is not expected to start until Thursday, when the managers will most likely exhibit the articles inside the Senate chamber.

Once they do so, the Senate will summon Chief Justice John G. Roberts Jr. to preside and all senators will take an oath to administer “impartial justice.” The Senate must promptly issue a summons to Mr. Trump informing him of the charges and requesting a response.

Republican leaders have said the proceeding will not begin in earnest until next Tuesday, after the long holiday weekend. That will give them time to clear other pending legislative items, including a North American trade agreement, and finish preparing for a process that could consume senators for weeks.

This story is developing. Check back for updates.