Jeopardy! The Greatest of All Time contestants Ken Jennings and Brad Rutter on what makes a winning quiz show personality. – Slate 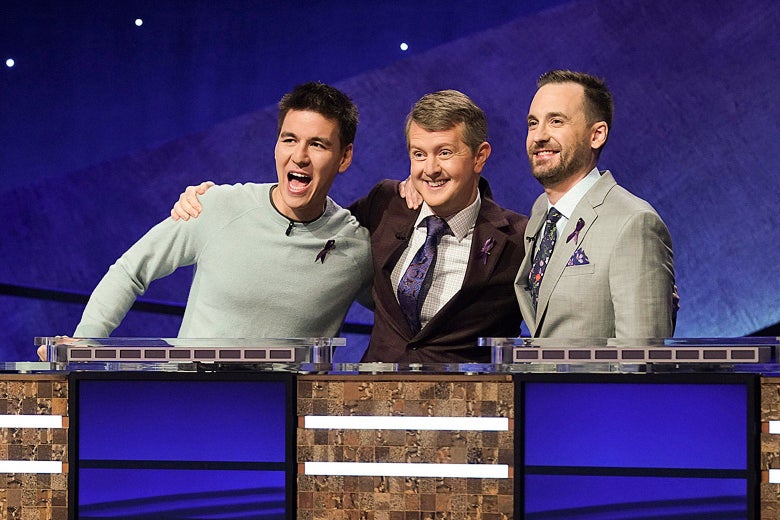 To judge from the shaky interview segment on an average episode of Jeopardy!—even after they’re heavily edited to minimize the awkward jokes, as many contestants report—most of the show’s contenders are not born television stars. And why would they be? They’re trivia dorks, a title they wear proudly. They’re there to crush questions, win money, and say something hokey about making it a true Daily Double.

Well, yes, except that before they ever reach the podium, they’ve navigated a labyrinthine process that includes an in-person audition that all must pass to prove they’re TV-ready. And this week’s Greatest of All Time tournament has sought more than ever to lionize stars James Holzhauer, Ken Jennings, and Brad Rutter not just as freakishly adept players but as small-screen personalities, with genial appearances on Good Morning America, minidocumentaries about their home lives during the show, and onstage banter no doubt punched up by producers. With the runaway success of the special series, Jeopardy! champions are creeping closer to reality stars than ever before.

Don’t take it from me. Robert Mills, ABC’s vice president of “alternative programming”—which is to say he oversees The Bachelor, Shark Tank, and other reality franchises—already has a buzzer-shaped gleam in his eyes. “Whether it’s something with Jeopardy! or not, certainly I would argue these three guys are the biggest stars in primetime right now,” he told Deadline. “You can’t look at this and not acknowledge the impact that they have had over the 20 years and this past week without saying, ‘OK. How do we tap into it?’ ”

If it was Rutter’s opportunity to claim his true place at the throne, he’s missed it. It’s clear who the two stars of the tournament are.

For many Jeopardy! superfans—a faction that notably includes Holzhauer, Jennings, and Rutter—this kind of talk is probably a little depressing. This isn’t what the keepers of J! Archive, the massive database of Jeopardy! clues that has become an unofficial guide to the show, had in mind. The stripped-down standard-bearer of game shows, first launched in 1964, is threatening to get a little Hollywood. But even without the mechanizations of reality executives, it isn’t hard to see the Greatest of All Time tournament as a stealth battle for a different prize: what really crowns a true Jeopardy! star, beyond prowess on the buzzer and cumulative earnings. In that light, it was a two-man fight from the beginning.

When Holzhauer first appeared on Jeopardy! in April, it wasn’t so obvious he was a star. With his frozen smile, cocksure strategic maneuvering around the board, and annoying habit of silently pretending to put his chips “all in,” he first struck me as kind of a jerk. He was a professional gambler in Las Vegas—good for nerve when making big bets on Final Jeopardy, less good to endear you to people. But then he kept winning, spectacularly. His “all in” gesture became a signature, unfortunate but pure. By May, he had the full profile treatment in the New York Times. (His “strained toothy smile,” the piece suggested, was a bit of an act for the producers—but only because he wanted to get on the show and win so badly.) By the end of that month, his coronation both as a game-changing player and a true Jeopardy! sweetheart was complete. As one writer in this magazine put it, “He is my TV husband.” Even his eventual loss, to a Chicago librarian named Emma Boettcher, seemed to endear him to people when he immediately dashed to her platform and high-fived her.

When Jennings began his 74-game run in June 2004, he brought true quiz-bowl energy of the sweetest, most Utah variety. But as his winnings piled up, some began to see his unassuming, aw-shucks bravado as an irritating act. When he shook his head after one win, the Times noted, Alex Trebek shot back, “Is that in disbelief, or do you not want the money?” The same piece opened, “The most annoying man in game show history. Who is Ken Jennings?” Still, Jennings’ run—still the longest in the show’s history—vaulted him to fame that eclipsed Holzhauer’s in a different, less crowded TV era, inspiring both earnest profiles and scholarly analysis and sending him on the contemporaneous talk-show circuit, with an appearance on Today and a gig reading the Top 10 on Letterman. He’s since become a kind of hype man for Jeopardy!, synonymous with its highest reaches and affable network of alumni. (He also became, full disclosure, a contributor to Slate, hosting its weekly news quiz from 2012 to 2016.) All he had to do to cement his reputation was stop winning.

Then there is Rutter, both the richest Jeopardy! earner—and also one of its most hated. Why? Until this tournament, unlike Holzhauer and Jennings, Rutter never had the benefit of losing. (At least not to a human player. He lost to IBM’s Watson, which he gave the finger after one match.) He also never had a run comparable to what Jennings and Holzhauer pulled off, because when he first appeared on the show, in October 2000, players were still capped to five games during their initial appearances. He left with $55,102 and two Chevrolet Camaros. Instead, Rutter amassed his Jeopardy! fortune—at $4.8 million—in various tournaments over the years. But even as he continued to dominate in tournaments, he did not attract celebrity profiles or special attention to his strategy. With an affect that read more professorial and arrogant than know-it-all but kindhearted, he suffered compared with his closest competitors, especially as Twitter grew in popularity. “@KenJennings please kick @bradrutter’s ass for me.
You have so much more class and grace than he does on @Jeopardy,” one wrote. “If you don’t hate @bradrutter, then I now hate you.” (Taking a page from another Jeopardy! antihero, Arthur Chu, Rutter retweeted the meanest remarks.)

This did not go unnoticed. When Vanity Fair published a spread about his unusually good style—a feature that, in retrospect, may not have endeared him further to the average Jeopardy! fan—it suggested his sartorial swagger may be to blame for “the Twitter venom.” Rutter himself, when he hopped on Reddit for an Ask Me Anything session, set his username as “CockySmugDBag.” “So, you’ve won the last three mega-tournaments, and are by any reasonable metric the greatest Jeopardy! Player ever. And yet, Ken Jennings (the guy you’ve beat twice so far) remains the best-known Jeopardy champion by far. Does that bother you at all?” the top question asked him. Rutter replied, “I hit my knees every night and pray for the Lord to smite him.” He added, somewhat convincingly, that it bothered his friends more than him, and that Jennings “actually is a great guy and a wonderful ambassador for the show.”

“In the social media age, you do tend to see players who are mugging a bit for the camera, and they often become fan favorites,” Ken Jennings says.

This history clearly informs the Greatest of All Time tournament. Going into the first match, Jennings joked about his previous losses to Rutter, and it seemed conceivable Rutter, not Jennings, would be a spoiler to Holzhauer’s dominance, still fresh in many fans’ minds. It hasn’t turned out that way. Rutter lost all three of the initial matches decisively, and he sputtered out in one game so badly he finished in the red and didn’t make Final Jeopardy. His chemistry with his co-stars, as it were, also feels less developed. In early episodes of the tournament, Holzhauer and Jennings flirt and fist bump ostentatiously, and Jennings even mimics Holzhauer’s notorious “all in” motion. If it was Rutter’s opportunity to claim his true place at the throne, he’s missed it, both as a player and personality. It’s clear who the two stars of the tournament are.

If it had gone another way, would Rutter have risen up to the mythic status of his competitors, or would he still have remained a Wikipedia stat in the mind of the casual Jeopardy! viewer? It’s hard to say. The line between the Jeopardy! champion and the Jeopardy! celebrity may have been drawn many years ago, when producers decided to do away with the five-game rule and created the conditions that eventually bore this tournament. Besides, even if Jennings wins the tournament, he won’t eclipse Rutter’s total earnings to date.

When Holzhauer was deep in his initial run, before the rumbling of the Greatest of All Time began to shake the Jeopardy! foundations, I started to wonder how much of what we were seeing was performance, an attempt to form a Jeopardy! legacy beyond earnings. I asked Jennings and Rutter if that had ever been on their minds. “In the social media age, you do tend to see players who are mugging a bit for the camera, and they often become fan favorites,” Jennings told me. When he was on, “in the dark ages of 2004,” that wasn’t the case. “You put on the suit you wore to your cousin’s wedding and smiled politely at Alex and did what you were told.”

Rutter agreed. He pointed to New York bartender Austin Rogers, who won 12 games on Jeopardy!, as an example of a persona that was more memorable than his winnings. “But most of the time you’re not thinking about that,” he said. “You’re thinking about beating the other players.”

Jennings was blunter. “In person, I’m probably extremely close to my Jeopardy! persona, insofar as Jeopardy! even has enough cracks in its format to allow contestants a ‘persona.’ Criticizing a Jeopardy! player’s ‘persona’ seems almost hilariously misguided to me. If the contestant won, their ‘persona’ worked. They got a fat check for winning their favorite TV show, they don’t care if jeopfan_1987 thinks their sweater was ugly or they had a weird laugh.”

Hilariously misguided as it might be, those “personas” have been harder to dismiss in the months since, with the Greatest of All Time tournament’s huge ratings and glittery prime-time rollout. As Mills, the ABC executive, put it, “We have got to do something—something that taps into what these guys are.” It seems Mills is betting that we’re just as interested in what these guys are as what they know.