The “Megxit”Fallout, Day 6: The Queen Lays Out The Program, Harry And William Get Back In Step, And Meghan Markle Does Not Phone In – Forbes 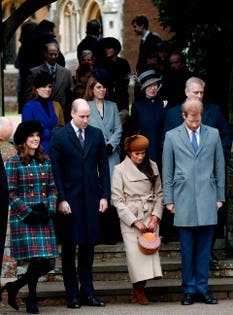 After sixty-seven years on the throne – sixty-eight years on February 6 – Queen Elizabeth has nothing left to prove. Spanning the epoch from the Korean War to the wars of Afghanistan and Iraq, her reign has been shaped by her resilience, the key to which is her practical, get-on-with-it calm. Issued at 5 p.m. Greenwich Mean, yesterday’s press release from Buckingham Palace Communications on the history-making parlay between her, Charles, William and Harry was yet another example of that practicality, and an extraordinarily personal one to boot.

Arguably most impressive is that simple, brilliant fact. The release wasn’t meant as a royal edict, and therein lies its depth and resonance. It’s a personal dispatch from the very front lines of a breaking news story involving her immediate family. This is the Queen as we have never seen her, namely, as a reporter. But the communique is also a picture of the Queen at work as we have always seen her, with an steely sense of resolve and of duty to the country. Her family matters in many inextricable, invisible, and in many public ways to Britain, and her family is in considerable and very public difficulty. The primary message of the dispatch is that she’s on the case, and is there to inform us of its progress.

Not one to beat around the bush, her dispatch heads straight at it: “Today my family had very constructive discussions on the future of my grandson and his family,” she begins.

The five short paragraphs were framed by aides – more on whom in a bit – but the immediacy and proximity of the Queen’s writing voice gave the release its lift and makes clear, in what follows, her emotional connection to her family and to Harry as a part of it. She wants us, her readers, to know how much she cares about the connection.

“My family and I are entirely supportive of Harry and Meghan’s desire to create a new life as a young family. Although we would have preferred them to remain full-time working members of the Royal Family, we respect and understand their wish to live a more independent life as a family while remaining a valued part of my family.”

It’s a most alert, caring, and grandmotherly form of address, explaining just enough of the last week’s events and enough of the framework for the future, but no more. The job of this communique is not to explain what is not yet possible to explain, namely, the actual form Harry’s and Meghan Markle’s secession will take. In contrast to the content of Harry and Meghan’s somewhat scrambled Instagram post, the Queen lays out the issues in what we can say is a more logical, stately form. Almost as deft in this section is the avoidance of saying too much about the sticking points, but she cuts to the chase and cuts off that discussion with the following sentence:

“Harry and Meghan have made clear that they do not want to be reliant on public funds in their new lives.”

Much has been made of the use of the couple’s first names here – including the theory that the Queen’s lack of formal address means that she may well decide to remove the sainted ‘HRH’ royal style of address from them. But speculation on this point seems premature, given the already-intimate context and tone of the dispatch thus far. What she’s saying here is, we are duty-bound considering the finances deeply. In this context, the first names of those involved are casual and appropriately so.

Next up is the tough part, the Queen’s de facto capitulation to their immediate travel agenda-by-fiat, as set out in Harry’s and Meghan’s disastrous Instagram post. It can be argued that Queen is papering over the fact that her granddaughter-in-law casually tossed a wrench in the works of the monarchy last week by turning on her heel without so much as a fare-thee-well. But, in the Queen’s eyes, it’s not the job of this dispatch to deal with Meghan Markle’s disastrous manners, nor is it the Queen’s job to scold her granddaughter-in-law for causing such anguish. Rather, in this quite sleek composition, the Queen’s capitulation arrives with great economy and a quiet sort of grace, grammatically distancing herself from the suitcase-nuclear device explosion that Harry and Meghan engineered last week by staying resolutely and diplomatically in the third person, passive voice:

“It has therefore been agreed that there will be a period of transition in which the Sussexes will spend time in Canada and the UK.”

And, she’s done. Canadian Prime Minister Justin Trudeau and his finance minister will, inevitably, be drawn into the negotiations as Canada and the UK haggle over financial and security issues, but that’s down the road. In concluding, the Queen adds that these are “complex matters,” acknowledges the amount of work to be done, and winds up by reporting that she’s asked for final decisions “to be reached in the coming days.”

She said no more than she had to, and yet she said everything. Here’s a world-class 93-year-old at the top of her game. Sovereign would be the word that best describes that.

Yesterday’s working summit of what’s called the “big four” — aka, the Queen, Charles, William and Harry — that resulted in the Queen’s communique were attended by their very closest aides. From the top down, they are: Sir Edward Young, private secretary to the queen; Clive Alderton, principal private secretary to Charles; Simon Case, William’s private secretary and a former Brexit negotiatior; and for Harry, seasoned former diplomat Fiona Mcilwham. No moss on these aides, so that the “agreement,” whatever it turns out to be, will be one that has had all ramifications well-thought through. Not that any of them will be getting any sleep over the next weeks.

While it was rumored in the runup to the summit that Ms. Markle could, concievably, be patched through on a conference call, just a cursory glance at the participants in the summit and their curricula vitae leads to the conclusion that she was not simply not wanted, she wasn’t actually needed. The table was occupied with exclusively British issues resulting from her actions and demands. It’s fair to say that Ms. Markle is a bright person of obviously capable intellect, but her scholarship of the intricacies of the Crown Estate, or its tax obligations in Canada, for instance, which is just one of the many layers of Commonwealth law that will be governing her stay in the country — is not up to snuff.

Ergo: Why patch her in.