Who Won the Debate? Experts Weigh In – The New York Times 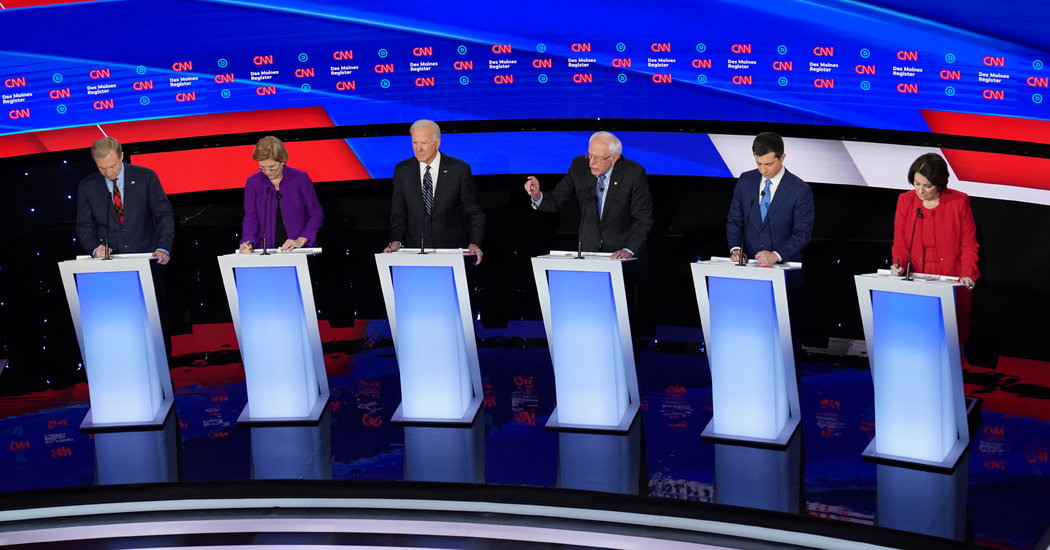 Twitter can’t tell us whether, or how, Tuesday’s CNN/Des Moines Register debate might change voters’ minds. But it can give us the perspectives of some of the people with expertise on primary races: veteran campaign strategists, consultants and analysts.

Here is a sampling of their reactions.

There was no real disagreement about the most effective moment of the night: Senator Elizabeth Warren’s response to the inevitable question about her dispute with Senator Bernie Sanders. After saying she was “not here to try to fight with Bernie,” Ms. Warren pivoted to the much larger question of women’s “electability.”

“What we will likely remember most from this night is @ewarren and her well litigated exchange with @BernieSanders on electability. This is very tricky terrain for women candidates and she came out the winner.” — Jennifer Palmieri, former spokeswoman for Hillary Clinton and Barack Obama

“I’m watching the #DemDebate with 30 of my university students, and they overwhelmingly picked @EWarren as the winner at the first break. Why? Because she emphasized female pride and empowerment.” — Frank Luntz, Republican pollster and consultant

“Warren is the only candidate whose performance could shake things up. Her electability riff was the most memorable thing all night. The fact she was the only candidate to break through with a singular moment ups the odds that tonight helps her.” — Ian Sams, former spokesman for Senator Kamala Harris’s presidential campaign

The consensus among the strategists and analysts was that Ms. Warren won the electability exchange with Mr. Sanders. But Mr. Sanders got good reviews for his overall debate performance.

“The exchange w/Warren notwithstanding, Bernie brings real energy to these debates. Probably uses them to energize his folks more than anyone does.” — Mo Elleithee, Georgetown Institute of Politics and Public Service and former Democratic National Committee spokesman

“The fact is Bernie Sanders knows his stuff. He also has a really impressive — and consistent — record of prescience on matters of foreign policy, climate, and trade.” — Kumar Rao, director of Justice Transformation at the Center for Popular Democracy

Senator Amy Klobuchar of Minnesota has performed well in almost every debate, and this one was no exception. Commentators singled out her responses on Iran and health care as particularly strong.

“Very solid, direct answer by @amyklobuchar on her predictions of what Trump would do with Iran. She said it, he did it.” — Amanda Renteria, interim president of Emerge and former national political director for Hillary Clinton

“Incredible moment for Klobuchar on long-term care — she demonstrated she really understands this critical issue that would make a huge difference for every American.” — Jess Morales Rocketto, political director of the National Domestic Workers Alliance

“Strong closing by @amyklobuchar. ‘We need a candidate who is actually going to bring people with her.’ She’s won every race. Easy to hurl insults. Easy to draw ideological lines in the sand. What’s hard is the work of governing. If you’re tired of extremes, she’s for you.” — Laura Belin, Iowa political commentator

Former Vice President Joseph R. Biden Jr. has a reputation for shaky debate performances, but strategists thought that he held his own on Tuesday, especially on foreign policy.

“@JoeBiden is so knowledgeable on foreign policy – it’s his forte, he knows it, we know it. Opportune time to demonstrate his strength in this area 20 days before the Iowa caucuses.” — Adrienne Elrod, former senior adviser to Hillary Clinton

“Biden is the most improved debater of this cycle. Rough in 1st couple of debates, but he’s really hit his stride in the later debates.” — Mo Elleithee

Like Mr. Biden, former Mayor Pete Buttigieg of South Bend, Ind., had some of his strongest moments in the foreign policy section of the debate, bringing in his own military experience.

“@PeteButtigieg personalizing the issue of war to a Navy buddy, achingly walking away from his toddler as he shipped off to Afghanistan was very effective.” — David Axelrod, former senior adviser to President Barack Obama

“A reminder through @PeteButtigieg’s #Iran answer, that he is one of the most gifted communicators we have in the field. Connects the wonky ‘#JCPOA’ to the bigger issue and highlights the centrality of collaboration to American security.” — Rose Jackson, senior policy adviser at the Open Society Foundations and former State Department official

The former hedge fund executive Tom Steyer was something of an odd man out: the only candidate onstage with no experience in elected office. And while strategists appreciated his focus on climate change, as well as his choice to reiterate other candidates’ responses, that lack of experience showed in the foreign policy and national security sections of the debate.

“I really love @TomSteyer’s take tonight. Using his precious air time to reiterate a complimentary message and praising other candidates instead of trying to draw an overt policy contrast.” — Adrienne Elrod

“@TomSteyer consistently strong on climate. I like the passion he shows on this issue.” — Paul Begala, former adviser to President Bill Clinton

“Not his fault but this whole national security discussion left @TomSteyer on the outside looking in. Just doesn’t have much relevant experience.” — David Axelrod

“The smaller the debate stage, the more Steyer seems out of his league on substance.” — Dave Wasserman, editor at the Cook Political Report