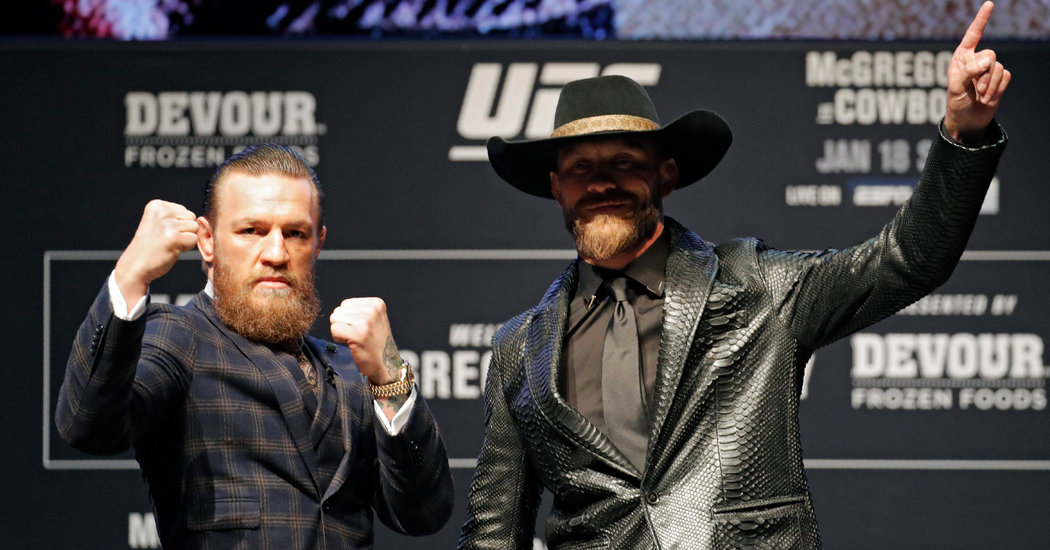 McGregor, the Ultimate Fighting Championship’s biggest draw, spoke at a news conference at the Palms Casino Resort ahead of a U.F.C. welterweight fight on Saturday against Donald Cerrone, his first fight in 15 months.

When a reporter asked about the status of the two investigations, McGregor’s fans, several hundred of whom packed the Pearl Theater at the Palms, booed loudly.

Cerrone intervened to tell the reporter to ask only about the fight, and the U.F.C. president, Dana White, maintained that McGregor had already answered questions about the sexual assault allegations during an earlier interview with ESPN.

When asked whether the investigations, one of which has been ongoing for more than a year, had ever jeopardized McGregor’s ability to compete in Saturday night’s bout with Cerrone, White simply replied, “No.”

In the time since McGregor’s loss to Khabib Nurmagomedov in that most recent bout, which ignited a ringside melee, McGregor has been beset by legal problems, including the two investigations of sexual assault allegations and a fine after pleading guilty to punching a man in a pub. At one point, McGregor also announced his retirement from mixed martial arts, only to return months later. It was the second time he had retired and come back.

McGregor, 31, has not been charged in either of the sexual assault cases, and the existence of the investigations does not imply that McGregor is guilty of any crime.

Through a publicist, McGregor has denied all accusations of sexual assault.

The U.F.C. has incorporated some of McGregor’s arrests into its marketing strategy for the comeback fight against Cerrone. A preview show that aired before Wednesday’s news conference included footage of McGregor punching the bar patron, and of the former champion throwing a dolly through the window of a bus containing Nurmagomedov and other fighters. McGregor pleaded guilty to assault in that incident.

At the news conference, McGregor did respond to a general question about his legal issues. “I’ve done nothing wrong here,” he said.

On Wednesday, while White and Cerrone addressed the question about the status of the sexual assault allegations, McGregor waited in silence for the news conference to move on to a new topic.

Under the usual protocol of criminal investigations in Ireland, a formal charge tends not to immediately follow an arrest. Asked recently about the status of the investigations, the Gardai declined to comment, saying it would not comment on “ongoing investigations,” without specifically referring to McGregor.

A person familiar with the investigations, who requested anonymity because they were not authorized to speak about the cases, said Wednesday that the cases remained open.

The Irish news media have reported on both cases extensively, but without naming McGregor; Irish law restricts the news media from identifying individuals charged with rape unless they are convicted, which has not happened in either instance. Instead, newspapers and broadcasters have linked the two cases and described the suspect as a well-known Irish sports star.

The arrest last January came three months after McGregor had lost to Nurmagomedov by submission. McGregor has rarely spoken to the news media since then, and when he has, he either has not been asked about the accusations or has addressed them only indirectly.

In an interview with ESPN published Monday, McGregor implied he was restricted in what he could say. “I can’t say anything about this,” he said. “It just has to take place.”

McGregor appeared to deny the accusations — though it wasn’t clear what he was denying, because the interviewer did not specify what investigations he was asking about — and said, “Time will reveal all, time will tell all. And then that’s it.”