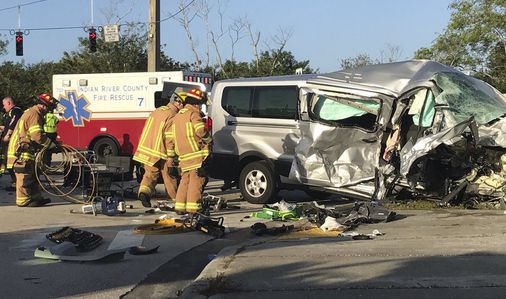 But a mile before the team reached the water, Rett was killed in a devastating crash that turned a Florida highway into what a police lieutenant later described as a “war zone.” As the survivors looked on, helicopters and ambulances raced a dozen patients to hospitals, some with life-threatening injuries.

The crash reverberated far beyond Vero Beach, even as investigators sought to understand its circumstances.

Twenty-two members of the crew team and its coaches were traveling in a two-van convoy with Rett riding shotgun in the lead vehicle. She wore a seat belt, officials believe, but it would do no good.

As they made their way to training camp at the Vero Beach Rowing Club, the vans pulled into a turn-lane to take a left onto Barber Bridge. The first van, carrying Rett, took a left into oncoming traffic. Rowers in the second van watched in horror as their teammates collided with a red pickup truck.

The front passenger section of the van absorbed the brunt of the collision, crushing Rett inside. A day after her 20th birthday, she suffered a heart attack and died there, a short distance from the water where the team practiced.

“Words cannot express how utterly heartbroken we are at the loss of our beloved Grace,” Rett’s family said in a statement. “A warm-hearted, kind, and gifted young woman, Grace lived every second of every day with a contagiously positive spirit that enriched the lives of everyone around her.”

At 7:28 a.m. police and ambulances raced to the scene, where 12 other people, including both drivers, were injured. Eight people were taken to Lawnwood Regional Medical Center in Fort Pierce, with the three most seriously hurt flown by helicopter.

Three were in critical condition Wednesday night, three were in serious condition, and two were in good condition, said Tiffany Woods, a hospital spokeswoman. Authorities have not released the names of any of the other crash victims.

No one in the second Holy Cross van was physically injured, but they witnessed the ghastly crash that took the life of a teammate. “Obviously, they are not doing well,’’ Vero Beach Police Chief David Currey said.

Investigators have not said why the van turned into oncoming traffic.

In Worcester, Holy Cross’s hilly campus was mostly empty Wednesday because of winter break. The school brought counselors and chaplains to the Luth Athletic Complex for a brief meeting for the few students on campus, which included athletes who had returned early for practices and matches. A memorial ceremony will be held for Rett when college is back in session, according to dean of students Michele Murray.

Holy Cross president the Rev. Philip L. Boroughs and athletic director Marcus Blossom traveled Wednesday to be with the team in Florida.

The school postponed a men’s basketball game against Army and issued a statement that asked people to “keep all those involved and their families in your prayers.”

Boston College offered its support as a fellow Jesuit institution, issuing a statement expressing its heartfelt condolences. “Our schools have so much in common and so many of our students have close friends who attend Holy Cross,” the statement read.

News of Rett’s death unleashed an outpouring of grief for a determined young woman with seemingly limitless potential. She was a Bruins fan partial to David Pastrnak, according to her social media posts, which featured a recent picture of her at TD Garden wearing his jersey. Rett and her family were active in the music ministry at St. Patrick’s Catholic Church in Whitinsville, which posted a remembrance online that noted she loved to sing.

But rowing was a major focus in Rett’s life. She attended Marianapolis Preparatory School in Thompson, Conn., where she rewrote the crew team record book. For two years, she was unbeaten at home, and as a freshman set all-time marks in the 2,000 and 6,000 meters in indoor rowing, according to Holy Cross’s website.

“She always pushed me to do my best,” said a high school friend and teammate, Ciara Wells, in an e-mail. “Rowing was her life, she was always so dedicated to it and so hardworking, taking ‘student-athlete’ to its fullest potential.”

When as a senior she committed to row at Holy Cross, Rett became “the first Marianapolis student to row at the collegiate level,” according to the school’s website.

Rett graduated from high school in 2018 and her success continued in Worcester, where she studied English and psychology, according to her biography on Holy Cross’s website.

In December, Rett tackled a remarkable indoor rowing challenge. She set a world record for her age by rowing continually for 62 hours and 2 seconds. Working on an indoor machine, Rett rowed the equivalent of more than 237 miles, according to her high school.

“Never had a doubt that my sister would beat this world record!” her sister, Brianne Rett, wrote on Twitter. “My sister finishes what she starts!”

The Holy Cross women’s crew season was to open April 4 in Lake Quinsigamond against Colgate, according the team’s schedule. The team arrived in Florida Monday for a weeklong training camp at Vero Beach Rowing Club, according to the club’s director of rowing, Brian Colgan. It was the team’s first time at the club, Colgan said.

After Rett’s birthday Tuesday, the team was headed for another workout Wednesday morning. It would be a good day to be on the water: At 7 a.m. the temperature was 64 degrees and rising.

The two vans drove south on Indian River Boulevard before trying to take the left onto Barber Bridge — at an intersection that has a dangerous history.

There were more than 50 crashes near the intersection in 2017 and 2018, according to data from the Florida Department of Highway Safety and Motor Vehicles. At least one of those crashes was fatal, killing a 58-year-old bicyclist in February 2018. Four other crashes caused injuries, including one that left two passengers with serious injuries. Another 15 crashes were listed as possibly injuring one or more people.

For college athletes, large passenger vans also have a long history of safety problems although officials have given no indication that the type of van contributed to Wednesday’s crash. In 2006, the NCAA issued a 65-page travel safety guide for universities that addressed longstanding issues with large passenger vans.

“Many educational institutions have discontinued the use of these vans for transporting passengers, either removing them entirely from their fleets or restricting their use to carrying materials,” the guide states.

The guide also recommends limiting the number of occupants to 10 passengers and requiring drivers obtain special training. At Holy Cross, the transportation policy requires students and staff to take a road test and driver training course before driving university-owned or -leased vehicles.

There were 12 people in the Holy Cross van that crashed and 10 in the van that followed, according to a college spokesman.

Police have not released the name of the person driving the Holy Cross van in which Rett was killed. The Holy Cross spokesman also declined to identify the driver.

By Wednesday night, all that remained of the crash at the busy intersection were shards of glass glinting under the stars, bits of broken plastic, and deep black skid marks.

A single bouquet of fresh roses and lilies was attached to the light post nearby. Cars whizzed by.