Takeaways From Chiefs-Titans, 49ers-Packers Before the NFL Title Games – The Ringer 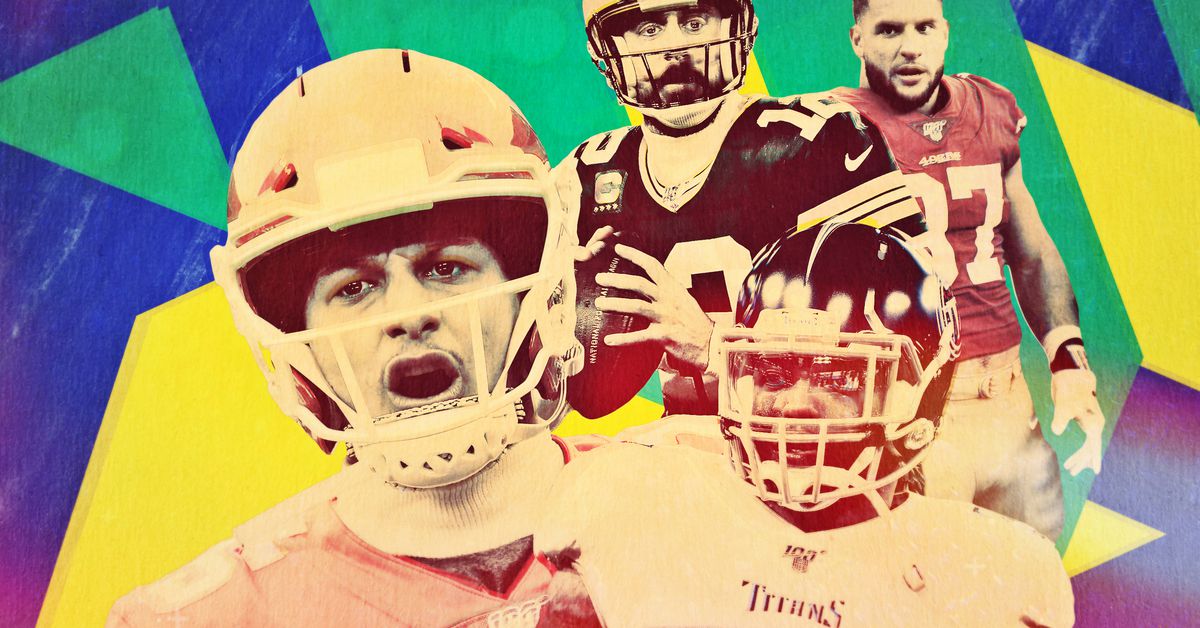 We have been here before. On November 10, the Titans upset the Chiefs 35-32 in Nashville. Two weeks later, the 49ers thwacked the Packers 37-8 on Sunday Night Football. Fast-forward two months, and these two matchups will decide who goes to the Super Bowl. A lot has changed since these original games—the Titans’ Week 10 win was, after all, 27 Joe Burrow touchdown passes ago—but they can still provide insight into how championship Sunday might go. So what can these November games tell us halfway through January?

Take one glance at the box score, and it seems preposterous that the Chiefs lost this game. In his first game back after missing almost a month with a dislocated kneecap, Patrick Mahomes went 36-of-50 passing for 446 yards with three touchdowns. The 446 yards were the second most of his career, topped only by his 478-yard outing against the Rams on Monday Night Football in 2018. Wide receiver Tyreek Hill caught 11 passes for 157 yards with a score, and Kansas City racked up 530 total yards, its highest mark of the season and fourth highest in seven years under Andy Reid. The Chiefs had the ball for just shy of 38 minutes. The only game in which a Reid-coached team has kept possession for longer and lost came in Reid’s first year as head coach of the Eagles in 1999.

Rewatch this game, and the Chiefs’ loss is even sillier than the stats indicate. How could Kansas City dominate so thoroughly but still fall? It made a handful of mistakes, and the Titans capitalized on most of them. Tennessee didn’t beat the Chiefs so much as the Chiefs beat themselves—a strikingly similar story to how Kansas City fell behind the Texans 24-0 before mounting a stunning comeback in the divisional round. Let’s run through those mistakes.

Mistake no. 1: Kansas City’s first problem was penalties. The Chiefs were flagged nine times for 80 yards, and most of the damage was done early. On Tennessee’s opening possession, Kansas City stripsacked Ryan Tannehill and recovered the fumble to give the Chiefs the ball at the Titans’ 20-yard line. They proceeded to gain 66 yards on their next seven plays—a total made possible only because penalties pushed them back 68 yards. Kansas City was forced to settle for a field goal instead of scoring a touchdown for a four-point swing in a game it ultimately lost by three. This was just the beginning of a stunning series of errors for the Chiefs.

It’s unclear whether Lucas miscommunicated with his fellow defenders or simply didn’t see Raymond, but regardless, the completion was devastating. The Titans scored a touchdown three plays later to cut their deficit to 10-7.

Giving up a long contested pass to Tennessee’s rookie sensation A.J. Brown would’ve been understandable, but Raymond had just one catch in his previous two seasons entering this game. Kansas City let him more than double his career receiving yardage on one play.

Mistake no. 3: Exactly four minutes after the Titans scored that touchdown, Chiefs running back Damien Williams fumbled while trying to cut upfield. Titans linebacker Rashaan Evans scooped up the ball and ran 53 yards to the end zone for a score.

Just like that, the Titans were leading 13-10 and doing shots to celebrate.

Mistake no. 4: In the first 28 minutes of this game, the Titans offense ran just 13 plays, and Derrick Henry had just 23 rushing yards. But Henry got going with about a minute remaining in the second quarter, and went on to finish the game with 188 yards. (This marked the second game Henry had rushed for 180-plus yards as a pro. He has since done that in each of his past three games).

Henry’s breakout was on when the Chiefs failed to tackle him on this 68-yard touchdown midway through the third quarter.

Mistakes nos. 5 and 6: The Chiefs were still in control of the game in the final few minutes, but their kicking game failed them late. Up 32-27 with about a minute and a half left in the fourth quarter, Kansas City lined up for a 47-yard field goal to extend its lead to eight. Then long snapper James Winchester and holder Dustin Colquitt botched the snap, and kicker Harrison Butker never even got to attempt a kick. Colquitt tried passing and was called for intentional grounding, giving the Titans strong field position. Tennessee drove 61 yards to score a touchdown, and converted the two-point try to go ahead 35-32.

The Chiefs’ kicking unit got a chance to make things right. The offense moved the ball from its own 38-yard line to the Tennessee 35-yard line in just two plays to set up Butker with a 52-yard field goal attempt. His potential game-tying kick was blocked.

What has changed: Mahomes is the healthiest he’s been since Week 1. He rushed for 53 yards last week against Houston after rushing for 52 yards in his four previous games combined. When the Chiefs and Titans played in Week 10, Mahomes didn’t run once. That’s likely to change on Sunday. Much of his scrambling against the Texans came when Houston was in man coverage, with the defenders turning their backs to the line of scrimmage and running with wide receivers downfield. Tennessee was much more successful guarding Tyreek Hill and Travis Kelce in man than in zone coverage during their initial matchup, but Mahomes’s rushing ability may complicate that plan.

Mahomes’s health gives the Chiefs a bigger advantage than they had last time around. While Tennessee won that game, Kansas City was in command most of the way—it succumbed only after all of its penalties, special teams gaffes, and costly turnovers added up. The Chiefs will be hard to beat if they don’t beat themselves.

Yeesh. Green Bay was seemingly knocked from contender to pretender with one gross performance that suggested it was not among the cream of the NFC crop. This is the fewest points the Packers have scored in a game when Aaron Rodgers played at least two quarters since 2015. He went 20-of-33 passing for 104 yards, the second-lowest total of his career in a game he started and played into the fourth quarter. And the 3.2 yards-per-attempt mark was the lowest of any start in his career. Amazingly, 63 of Rodgers’s 104 passing yards came after the catch, meaning that Rodgers truly gained just 41 yards through the air. He also lost 38 yards on five sacks, so he netted roughly 3 yards. Tough beat.

“This is a good slice of humble pie for us,” Rodgers said after the game. “I think this will be a good thing for us.”

It turned out to be a great thing for them. The 49ers gave the Packers everything they could handle, plus 29 more points they could not, and Green Bay was able to study and learn from what went wrong. That starts with its third-down offense: The Packers converted one of 15 third-down opportunities in San Francisco (6.6 percent, or roughly the odds of being dealt a pair in Texas Hold’em). Even worse, the lone conversion was running back Jamaal Williams rushing for 12 yards on the game’s penultimate play, when backup quarterback Tim Boyle was under center. Statistically, this might have been Rodgers’s worst start.

That said, the game doesn’t look quite so bad on a rewatch. Rodgers isn’t good by any stretch, but he’s not as awful as the stats suggest. This game was 13-0 heading into the final two minutes of the second quarter, and then the 49ers rattled off 10 points in 34 seconds to go up 23-0 at the half. And things almost went down a different path: On a second-and-8 early in the second quarter, Rodgers barely missed on a long pass to receiver Davante Adams, whose arm was pinned by cornerback Ahkello Witherspoon.

Later that quarter, Rodgers was inches away from hitting Adams deep to move into 49ers’ territory just before the two-minute warning.

Between those two Adams throws, Rodgers also put a 40-yard pass into tight end Jimmy Graham’s breadbasket on a key third-and-8. But San Francisco defensive back Jimmie Ward managed to pry the ball loose enough that Graham lost it when he went to the ground.

Any football game has a dozen what if moments, but the Packers had three in the second quarter alone. The 49ers were better than Green Bay in this matchup, but it wasn’t as lopsided as the final score.

What has changed: The Packers offense looked better in the divisional round against Seattle than it has in weeks, especially Rodgers’s connection with Adams. The San Francisco game was Adams’s third after returning from a turf toe injury that cost him all of October. Now, Adams appears to be at full strength, and he and Rodgers are once again on the same wavelength.

“Tonight reminds me of the connection that Jordy [Nelson] and I had for so many years where there was some unspoken things that we could do without even communicating anything about it,” Rodgers said in his postgame press conference Sunday. “Davante made three or four plays like that tonight, so that was pretty fun.”

The 49ers present a different challenge than the Seahawks. San Francisco pressures quarterbacks at the league’s second-highest rate (29 percent), whereas the Seahawks do so at the league’s fifth-lowest rate (19 percent). But the Niners may not be as successful in getting to Rodgers as they were in Week 12. Right tackle Bryan Bulaga left that game after nine snaps and was replaced by Alex Light, a second-year undrafted player out of Richmond who was suddenly tasked with blocking Nick Bosa. Bulaga and Light both missed last Sunday’s Seahawks game due to illness, so the Packers were forced to rely on 32-year-old right tackle Jared Veldheer. Veldheer, who has 113 career starts but retired before the season, played well considering he found out he was going to start while watching television.

Bulaga is expected to start at right tackle against the 49ers. Even if he doesn’t, Veldheer and Light should be far more prepared than either were in their prior relief duties. More time for Rodgers on Sunday could make this a very different game.