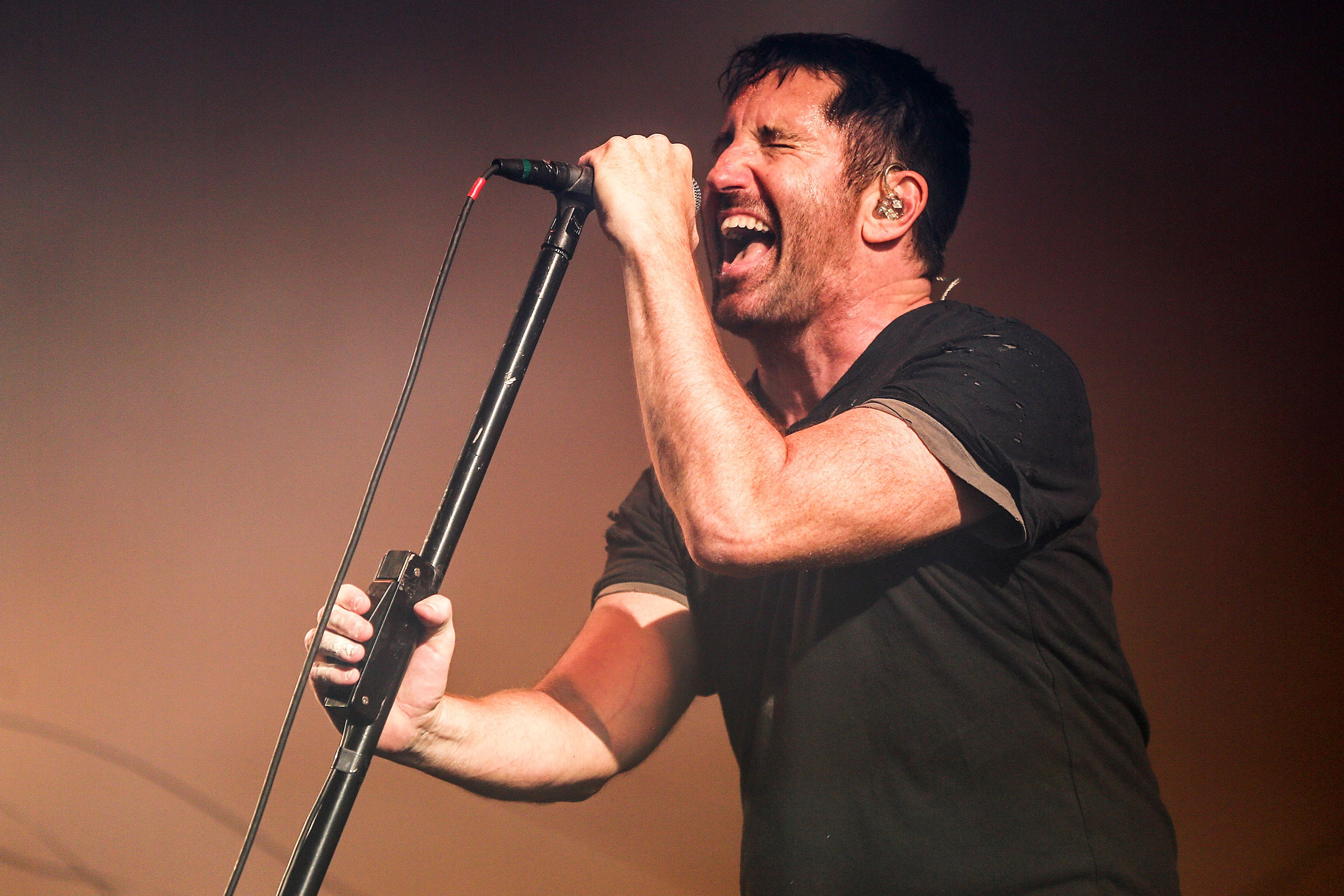 Trent Reznor has sold millions of records, played to oceans of fans at festivals all over the world and even won an Oscar. But the Nine Inch Nails leader was in a “state of shock” when he called into Rolling Stone to discuss his group’s admission into the Rock and Roll Hall of Fame alongside Whitney Houston, Depeche Mode, T-Rex, Notorious B.I.G and the Doobie Brothers. They’ve been eligible ever since their 1989 debut LP Pretty Hate Machine turned 25 in 2014, but this was their third time on the ballot and he truly believed he’d find himself in the position of facing rejection year after year.

Reznor spoke to us about his shock, why this is especially meaningful for him, his history in Cleveland and his thoughts on a possible Nine Inch Nails tour later this year.

Congratulations on the big news.
[Faux casual tone] Oh yeah. No big deal. [Laughs]. No, I’m pretty freaked out. I’m quite in shock.

Why shock?
I’m actually quite surprised. When I look back at how Nine Inch Nails are received, it always seems like we fall between the cracks or we’re not in this category or “that thing.” I don’t know if it’s a defense mechanism, but I just assumed we’d stay in that category, so I’m pleasantly surprised to see us acknowledged. It feels pretty good.

This was your third ballot, so I imagine you’d gotten used to seeing your name on there but not making it in.
Used to failing, yeah. I’m kind of relieved because I figured that every year for the rest of my life, I’d have a new disappointment reminding me, “You’re not good enough.”

How does this compare to your Oscar win?
Well, I haven’t really had time to deeply think it through. The Oscar win was a surreal experience because it truly came out of nowhere. It wasn’t anything I’d even thought about. We were just immersed in working on something that we really believed in and felt we did a good job at. And to see that people who knew what they were doing, they think we did a pretty good job. That felt legit. You wake up the next day and you’re still the same asshole you were before you got it, but it felt significant. It felt nice.

I had thought the Rock and Roll Hall of Fame concept felt absurd. In some ways, it surely is; to try and quantify something as broad as that and inevitably add a competitive element to it. The gamification of it is hard to rationalize. Being there in that room last year to induct the Cure felt really cool. Sitting with the guys in Radiohead and watching Bryan Ferry play. It is just nice to see a bunch of people celebrating music as the primary thing. It felt legit. It really felt good. Like I said, it hasn’t really sunk in yet, but I’m quite honored that we’re being recognized.

It’s going to be in Cleveland, which I imagine will be extra special to you because of your history there.
Yeah. I remember back when there was first talk of a Rock and Roll Hall of Fame. There was somewhat, as I recall, of a competition about what city would get it. I was working at a music shop that sold keyboards and drum machines. There was some effort on the part of the store to draw up interest because they thought it would be a cool thing because the city needed something other than sports in order to focus it. It’s crazy to think all these years later that, wow, against all odds, I wound up as a part of that.

You started your first album there, so it’s going full circle.
I grew up about an hour and a half outside of Cleveland and got sucked into Cleveland once I dropped out of school. To me, there was a pretty vibrant music scene happening there, especially compared to Pittsburgh, the other close city to me at the time. And I cut my teeth there, played in some bands and went through my early twenties. “I better do something with my life.” Then I had the opportunity to work in a studio there and really focus on what would become Nine Inch Nails and really hone the vision and blueprint of what that remains to this day, in Cleveland. That’s a romantic, rose-colored glasses vision of my Cleveland years.

They are just taking you and nobody else from the band. Was that the right call?
My preference would be that my band get inducted. I’m not the one deciding that, but there’s an effort on my part to acknowledge that.

It’s a pretty cool group this year. I imagine you like Depeche Mode and Biggie and T. Rex.
I’m thrilled Depeche finally made it in. When it gets weird for me is when you think about, “Okay, who’s in? Who’s out?” And you see Kraftwerk and Todd Rundgren not get in. That’s when it’s like, “Okay, what’s the criteria here? These guys should absolutely fucking be in there.” Both of those that I mentioned were hugely influential. I don’t think I would be me had those guys not existed. That’s where I think of it with a grain of salt.

I also think about Joy Division/New Order.
Sure. When you start pulling on the thread, how do you make all that make sense? It is what it is. I think the weirdest feeling for me at the moment is that regardless of where I am, I don’t feel like I fit in anywhere. There’s no Sirius satellite radio station I can put on that is my type of music or even plays Nine Inch Nails for that matter. I assumed we’d have that same fate in the judgement of the Rock and Roll Hall of Fame. So I’m allowing myself, for a limited period of time, to feel good about this.

You wore a tux to the Oscars, but I can’t imagine you wearing one as you’re singing “March of the Pigs.”
That probably won’t happen. [Laughs] You never know, though.

Can you imagine a big all-star jam with you and Depeche Mode and some of the others?
That’s a little fuzzier. [Laughs]

It’ll be interesting to see who inducts you. Any idea who you want to see do that?
No. Like I said, this is still fresh information. And I just had a new baby over the weekend.

I see NIN and Depeche Mode’s induction as vindication for the type of music you make. For so long, the Hall of Fame seemed to strongly favor guitar-based bands and they seemed to look down on groups that used synthesizers.
Yeah. I would hope that’s the case. And there’s the inclusion of some hip-hop acts. To me, it’s the spirit of rock and roll. That doesn’t mean it has to be guitar/bass/drums. It can be a turntable, a computer, a synthesizer, sequencer. They are all tools. It’s the spirit of expression and, to me, freedom and no limits to expression. That’s my version of what rock means and the method of achieving doesn’t need to be quantified to where it has to have this instrument.

It’s cool seeing Whitney Houston too. It’s all rock.
Yeah. With that said, let’s get more synthesizers out there to round it out a little bit.

Yeah. They should take in Kraftwerk and Gary Numan and, again, Joy Division. It’s time.
I completely agree with you.

I’ve read you might tour this year. Is that right?
We’re talking about doing some shows this year, yes. Nothing announced yet. We’re coming off what seems like an endless amount of time we’ve been scoring films. We had a few projects but into each other. I’m itching. I’m ready.

Are you thinking about returning to the bigger venues after playing those large theaters on the last tour?
I don’t know. I’m not exactly sure what the plan is. We enjoyed that last run. Before we’d take anything on, there really is a “hit the pause button” and sit down with our team and say, “What feels right?” It’s not automatically, do the thing without thinking it through. That last wave of playing multiple nights and varied setlist in theaters had an intimacy to it that felt cool. I feel like Spinal Tap when I say those words, when he’s trying to justify having a small audience.

Are you still working on that collaborative album you talked about?
I kind of blurted that out without thinking deeply through. We aren’t far along in the process. It’s literally been every single day trying to dig ourselves out of the scoring hole that we got ourselves into. That is our desire and there’s been some things done, but it’s not imminent. Nothing is about to come out.

This is the first year where HBO is running it live, so that’s extra pressure.
Thanks for bringing that up! [Laughs]