Warren Told Sanders After Debate, ‘I Think You Called Me a Liar on National TV’ – The New York Times 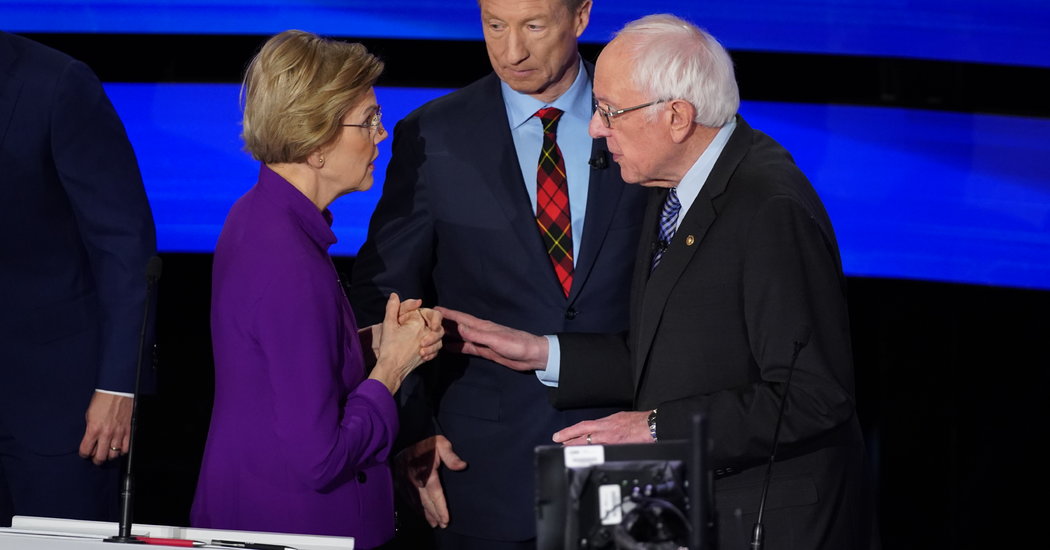 DES MOINES — The nonaggression pact between the Democratic presidential campaign’s two leading liberals blew up on the debate stage Tuesday night, with Senator Elizabeth Warren accusing Senator Bernie Sanders after the event of calling her “a liar on national TV.”

Coming less than three weeks before the Iowa caucuses, where the four Democrats are in close competition, the rupture has the potential to anger supporters of both Ms. Warren and Mr. Sanders and inject negativity into a race in a state that often rewards positive behavior from presidential candidates.

“I think you called me a liar on national TV,” Ms. Warren told Mr. Sanders after the debate, referring to their earlier dispute onstage over whether he told her in a private 2018 meeting that a woman could not be president. The New York Times described details of their exchange on Wednesday afternoon, and CNN broadcast an audio recording on Wednesday night.

According to the audio, Mr. Sanders responded, “What?”

“I think you called me a liar on national TV,” she said again.

Tom Steyer, the billionaire businessman, approached Mr. Sanders in the middle of the exchange.

The newly exposed rift between Mr. Sanders and Ms. Warren has already roiled progressives, who fear the public division will benefit the moderates in the race — and, more broadly, threatens the movement they have tried so hard to build. Leading progressive groups spent hours Wednesday trying to craft joint statements of unity among themselves while their leading political figures were in the most bitter public fight of their professional lives.

“I am hoping that volunteers and grass-roots groups can help bridge the gap that has opened between Warren and Sanders around their 2018 conversation,” said Larry Cohen, a longtime friend and adviser to Mr. Sanders who serves as chairman of Our Revolution, the organization that spun out of the 2016 Sanders campaign. “We remain focused on racial and gender justice, health care, climate crisis, good jobs, student debt and free college, the spiraling military budget and more. I don’t see a path forward on those issues in the Senate or at the Democratic National Convention in Milwaukee without cooperation when the time comes.”

Many progressive leaders point to the 2004 primary as a cautionary tail, when feuding between the more liberal candidacies of Representative Richard A. Gephardt of Missouri and former Gov. Howard Dean of Vermont helped the more moderate Senator John Kerry of Massachusetts win the Iowa caucus after a summer slump.

“It’s absolutely critical that progressives focus their fire on the corporate wing of the party to not allow a repeat of the 2004 election,” said Neil Sroka, communications director for Democracy for America, a liberal group founded by Mr. Dean after his unsuccessful primary run.

Both the Warren and Sanders campaigns declined to comment on Wednesday. By the time CNN aired the footage, the two candidates had not spoken about the exchange, people familiar with their whereabouts said, though they are expected to be in close contact when the Senate convenes Friday.

CNN executives initially said they did not believe the exchange had been captured by the network’s microphones. The network said its journalists located a recording late on Wednesday after reviewing audio from the microphones that Mr. Sanders and Ms. Warren had been wearing onstage.

Over the weekend, Ms. Warren said she was “disappointed” in Mr. Sanders after Politico reported that his campaign had distributed a script to volunteers suggesting she appealed mainly to highly educated voters. On Monday, CNN reported that Mr. Sanders had told Ms. Warren in a private meeting in 2018 that he thought a woman could not win the presidency; Mr. Sanders vehemently denied it.

“I thought a woman could win; he disagreed,” Ms. Warren said in a statement on Monday.

On Tuesday, the issue burst forth onto the debate stage in a remarkable moment before a national audience that captured the recent friction between the two senators.

“I didn’t say it,” Mr. Sanders insisted, about her characterization of his 2018 remarks. Ms. Warren disputed that, then called him her friend before pivoting to make the case that of the six candidates onstage, only the women had won all of their elections.

After the debate, Mr. Steyer repeatedly insisted he did not hear the back-and-forth between the two liberals.

“I was just saying good night to the two of them,” he said during a brief exchange with reporters in the debate spin room at Drake University. “I didn’t hear anything.”